The Approach Plates for the 12 January 2012 cycle are now live. No change notice file is available as once again Aeronav didn't include the needed files on the DVD. (And they want people to pay even more money for this level of not-service.)

Tablet Mounting:
So, before getting into a review of the actual HP Slate, I figured I'd mention how I personally mount it in the cockpit(and car if needed)

RAM Mounts(http://www.ram-mount.com/) are what I have been using for many years for mounting pretty much anything to any other thing. For the HP Slate, and for my Samsung 8.9 Tablet, and for my old Motion CL 900, I've been using the RAM-HOL-TAB-LGU(with some pieces removed for the CL900). This comes with 2 swappable pairs of ends for the different sized tablets.

The more interesting part is the system itself, RAM sells packaged bundles including a tray, ball, arm and yoke clamp. Sometimes, this is enough, but over the years I've flown many different aircraft and needed many more options. So, at present, here's what I generally carry when trying to get setup in a new airplane: 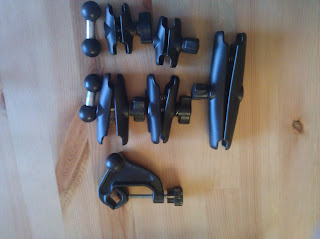 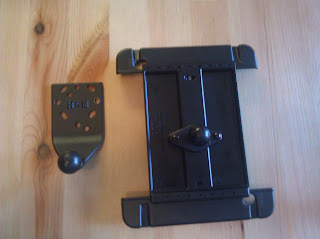 So, that's one long arm, 2 medium arms, 2 short arms, 2 connector barbells and a yoke clamp. And then on the cradle side, there's the standard ball, and an offset ball mount that works better sometimes. Personally, I mount so that the RAM arm is under the yoke, here's the system on the CL900: Chartbundle YouTube CL900 Yoke Mount Once I've gotten the mounting right for a particular airplane I stop carrying quite so many parts.

The most important part with any mount is checking to make sure it's not going to get in the way, so as soon as I attach the yoke clamp, I check clearance, then once the whole thing is assembled with the seat adjusted and my kneeboard on I do a full free and correct check. And once, while inflight to a particularly gusty crosswind landing I unscrewed the arm and tossed the whole thing into my flight bag.

HP Slate 2
So, the other half of this is how does the HP Slate 2 do as a cockpit computer. So, the model I have has no GPS, so there's an adapter off the side(in portrait mode) to the USB GPS I use but no other cables(as I don't have a DC adapter or extra battery yet)

As you can see, there's one significant problem, while I was flying a plane with a high wing so no sunlight directly fell on the tablet, it did reflect me perfectly. This I'm going to try and make better with an anti-glare protector, which seems better in my outside tests, but will check later in an actual airplane.

The tablet performs fine, if you've used a Windows 7 tablet for aviation, there were no surprises at all, perfectly fine performance with Jeppesen FliteDeck, good touch response, battery was fine for the 3.5 hours I had it on(but I forgot to check how full it was when I got done) The orientation lock switch is a nice touch so that when you turn the yoke to check the controls it doesn't keep flopping the display around. Honestly the biggest annoyance is the position of the USB and dock/power connections(top and bottom center in landscape) which will make cables a bit annoying since I usually fly with tablets in portrait.

The best thing, for me, is the size, it's significantly smaller than the Motion CL900 and fits much better in the planes I fly, less panel blocked and gets in the way less. If I can just work out the screen glare I think it will all be good.
Posted by chartbundle at 3:20 PM 2 comments:

Heading 'North': It's not really North from San Diego to Sacramento, but it's close enough for us pilots. Both directions were done on an IFR flight plan, mostly for airspace avoidance and ease of transition through the LA Basin as there was no significant weather on the flight.

KMYF to KMHR: Filed: OCN V23 SLI V459 LHS GMN V23 LIN. 8000. This was what DUATS suggested and looked like a pretty normal routing, and if it was IFR then Linden VOR is a good transition point to vectors or the full procedure into KMHR(LIN V338 HNW for the full procedure if it were needed)

Flown: Pretty much as filed, with an additional climb to 12,000 over the north part of the LA Basin before crossing into the central valley. A few miles after GMN cleared direct KMHR and kept that until we got the airport in sight.

There were a few bumps over the Tehachapis and widespread haze in the central and Sacramento valleys(4-10sm) but it was a nice flight once I got the Autopilot(Cessna Navomatic 300A single axis) trimmed out and happy.

Heading 'South' Once again IFR filed, haze in the valley but not enough to log any actual.

Cleared(KMHR Clearance): Lt hdg 150, Vectors Direct FROGO FRA EHF LHS As Filed. 6000, 9000 in 10.
So, that was a bit of a change, but FROGO is a pretty common point for Sacramento area departures.
So, departed, transferred to the first controller who looked at the routing and told me he'd try and get something better.
Cleared: Direct LHS.
Ok, much better.
Flown: KMHR (vector until new clearance) LHS V459 SLI V23 OCN Hdg 130 then the visual for 28R, then really 28L.

So, as usual, unless the initial clearance you get is just wrong, it's almost always better to be in the air and negotiate a better route than sitting on the ground wasting fuel doing it. Although, in both cases I called for my clearance from a handheld to save the fuel.

The rest of the flight was as boring as the flight going the other way. The most fun bit was after OCN(at 7000) once I said I'd expect the visual, I got a descent to 3000, ao about 175kts over the ground in the descent, luckily the air was totally smooth and calm. And ATC also
told me to maintain that speed for the descent. Not quite as fun as when I've been handed off at some airports at 5 miles and 3000 feet high for a visual, but still pretty good. And, of course, as the 182RG has the aerodynamics of a brick with wings once I crossed 3000 there were
no issues getting to a nice gear speed(I prefer 120 or lower even though 140 is approved) and making the runway.

Numbers:
Fuel: unknown but the dipstick showed it should be about the same, didn't wait for the truck

Of course, now I want something faster to fly that route, oh well.
Posted by chartbundle at 2:25 PM No comments:

So, as you all know, FAA Aeronav is going to switch to a pay as much as we want if you want our products model. Basically, this gives Chartbundle two options.

2. Find a source for scanned versions of the charts that we use for a reasonable price.

Obviously shutting down is the most likely scenario.

You'll notice there is no option 3. Pay Aeronav. as we have two problems with that.
1. Chartbundle has nowhere near the funding to support even the lowest Aeronav pricing tier(about $10,000 as I recall)

2. Aeronav wants DRM or other protections on the (public domain) data distributed. Although the PDF, EPUB and MOBI formats which we use all support DRM, it would significantly reduce the number of working devices and significantly increase our workload to support it with no increase in customer satisfaction.

The plan for my personal flying: Subscribe to a paper A/FD, use my Windows 7 tablet for my Jeppesen subscription and hope the Android Jeppesen application comes out soon.
Posted by chartbundle at 11:01 AM No comments:

The VFR and IFR charts have been updated for the 15 December 2011 Cycle.
As always, check the status link to verify the current versions.